Last week I blogged about reference assemblies, and how to create them. Since then, I’ve incorporated everything into my MSBuild.Sdk.Extras package to make it much easier. Please read the previous post to get an idea of the scenarios.

Using the Extras, most of that is eliminated. Instead, what you need is the following:

Reference Assemblies, what are they, why do I need that? Reference Assemblies are a special kind of assembly that’s passed to the compiler as a reference. They do not contain any implementation and are not valid for normal assembly loading (you’ll get an exception if you try outside of a reflection-only load context).

The method needs to be in the runtime version, but we need to hide it from the compiler. Fortunately, we can do this with a reference assembly. We can exclude the duplicate methods from the reference on platforms where it’s built-in, so those get resolved to the built-in Enumerable type, and for other platforms, they get the implementation from EnumerableEx.

I’m going to explore how I solved this for Ix, but the same concepts apply for the first scenario. I’m assuming you have a multi-targeted project containing your code. For Ix, it’s here.

It’s easiest to think of a reference assembly as a different project, with the same name, as your main project. I put mine in a refs directory, which enables some conventions that I’ll come back to shortly.

The key to these projects is that the directory/project name match, so it creates the same assembly identity. If you’re doing any custom versioning, be sure it applies to these as well.

There’s a couple things to note:

You should be able to build these reference assemblies, and in the output directory, you’ll see a ref subdirectory (in \bin\$(Configuration)\$(TargetFramework)\ref). If you open the assembly in a decompiler, you should see an assembly level: attribute [assembly: ReferenceAssembly]. If you inspect the methods, you’ll notice they’re all empty. 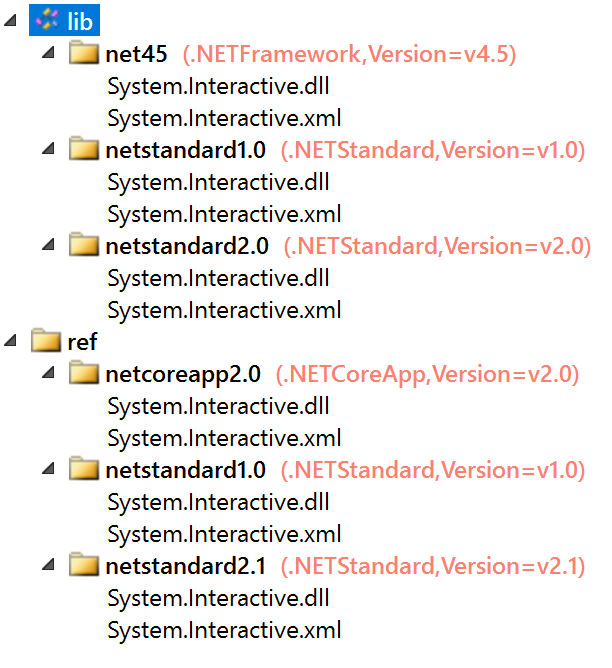 The contents of the ref folder may not exactly match the lib, and that’s okay. NuGet evaluates each independently for the intended purpose. For finding the assembly to pass as a reference to the compiler, it looks for the "best" target in ref. For runtime, it only looks in lib. That means it’s possible you’ll get a restore error if you try to use the package in an application without a supporting lib.